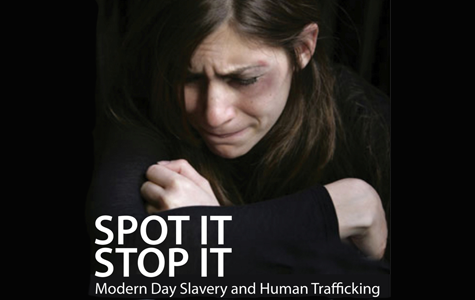 Caritas Anti-Trafficking is a response to Pope Francis’s call for Catholics and law enforcement officers around the world to join together in the fight against human trafficking and modern-day slavery. Human trafficking happens here, “hidden in plain sight”, and we all have a duty to be aware and report what we see. Moreover, we are all complicit in the poverty and exploitation that fuels human trafficking as Pope Francis tells us in Laudato Si: “In the absence of objective truths or sound principles other than the satisfaction of our own desires and immediate needs, what limits can be placed on human trafficking, organized crime, the drug trade, commerce in blood diamonds…”

Caritas Anti-Trafficking was inspired by an initiative in the parish of Our Lady of the Valley which works with East Lancashire Police in raising awareness on the issue and informing people what to do when they see something that doesn’t look right and probably isn’t.

Caritas Anti-Trafficking models itself off this parish group linking more widely with Greater Manchester Police, the Medaille Trust and the Santa Marta Group in Westminster. We network widely with charities and groups interested in tackling modern day slavery and we raise awareness within parishes and schools and with groups of interested or concerned adults.
We also offer advice, signposting and pastoral support to victims of human trafficking.

What is Modern Slavery report

Volunteers from Caritas Diocese of Salford on Saturday 16th October rode the Freedom Bus from Clitheroe to Preston to support the activities of PLASP – the Pan Lancashire Anti-Slavery Partnership.  An information stall alongside the bus parked outside the Cenotaph in Market Square, which was staffed by volunteers from Hope at Home and Caritas. The
more

The Freedom Bus goes to Liverpool

Anti-Slavery Day, 18th October, provides an opportunity to raise awareness of human trafficking and modern slavery, and encourage government, local authorities, companies, charities and individuals to do what they can to address the problem. To mark Anti-Slavery Day the Caritas Freedom Bus, developed and designed Our Lady of the Valley parishioners Clitheroe, Lancashire in the Diocese of
more
Resource Download
Cartias Diocese of Salford websites use cookies. By continuing to browse the site or closing this box you are agreeing to our use of cookies. For more details about cookies and how to manage them, see our Cookie Policy and Privacy Policy