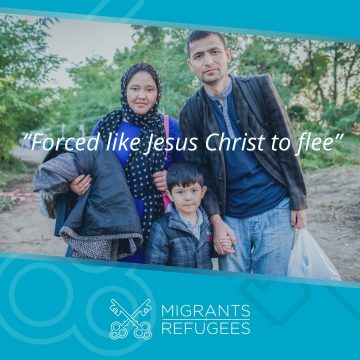 106th World Day of Prayer for Migrants and Refugees

Sunday 27th September
This Sunday sees the International Day of Migrants and Refugees.  Pope Francis has invited us to consider the theme of ‘Forced like Jesus Christ to flee’ reminding us that the Holy Family were also victims of forced displacement.

Message and prayer from Pope Francis

The Migrants and Refugees Section (MRS) of the Dicastery for Human Development have produced a wide range of prayers, intercessions, information for homilies and other excellent digital materials for use as part of this day and can be found via their website (below).

Background in the UK – Refugees and asylum seekers in England

Refugees to the UK arrive via one of two routes.  Either they have been accepted by a Government resettlement scheme and travel directly from another country or they have arrived in the UK and are submitting a claim for asylum.

Those who are seeking asylum and can show that they would otherwise be destitute are offered accommodation on no-choice basis and subsistence support of only £5.39 per day but are prohibited from working.  If their claim for asylum is recognised as legitimate, newly recognised refugees are given just 28 days ‘move-on period’ to leave their asylum accommodation.  However, this often forces refugees into further destitution, as it can take some time to access mainstream services, such as bank accounts, new housing and income from employment or welfare.

(with thanks to the Refugee Council for information)

Caritas Salford is responding in a variety of ways, to supporting those who have been forced to leave their country to escape war, persecution or natural disaster who and are seeking refuge in our area.  As well as providing a humanitarian response with food and support through our day centres in Cornerstone, Manchester or Bury, Caritas is a leader in supporting the government Community Sponsorship scheme which enables parish communities to welcome and support a resettled refugee family.  We continue to provide free education classes to around 150 people (currently via Zoom) to teach or help improve English language skills and are supporting many learners into higher or further education.  We also provide support and advice through ‘drop-in’ sessions at a variety of locations.  Much of this work is funded directly through donations and support of parishes, schools and individuals and we are very grateful for your support.

Father, you entrusted to Saint Joseph what you held most precious: the child Jesus and his Mother, in order to protect them from the dangers and threats of the wicked.

Grant that we may experience his protection and help. May he, who shared in the sufferings of those who flee from the hatred of the powerful, console and protect all our brothers and sisters driven by war, poverty and necessity to leave their homes and their lands to set out as refugees for safer places.

Help them, through the intercession of Saint Joseph, to find the strength to persevere, give them comfort in sorrows and courage amid their trials.

Grant to those who welcome them some of the tender love of this just and wise father, who loved Jesus as a true son and sustained Mary at every step of the way.

May he, who earned his bread by the work of his hands, watch over those who have seen everything in life taken away and obtain for them the dignity of a job and the serenity of a home.

We ask this through Jesus Christ, your Son, whom Saint Joseph saved by fleeing to Egypt, and trusting in the intercession of the Virgin Mary, whom he loved as a faithful husband in accordance with your will. Amen.

(Rome, Saint John Lateran, 13 May 2020, Memorial of the Blessed Virgin Mary of Fatima.)

“This is not a time for self-centredness, because the challenge we are facing is shared by all, without distinguishing between persons.”

During the flight into Egypt, the child Jesus experienced with his parents the tragic fate of the displaced and of refugees.

On this World Day of Migrants and Refugees, we pray that we will learn

how to be close in order to serve,

how to listen in order to be reconciled,

how to co-operate in order to build.

We give thanks for all who work to improve the lives of migrants and refugees.

May our parish always be a haven of safety and peace for those who have had to leave their home land.

Musaab Ali, 28, is originally from Darfur, in western Sudan and now lives in Moss Side, Manchester. He travelled from Sudan in 2015, to escape the civil war in Darfur. Conflict began in February 2003, when the Sudan Liberation Movement (SLM) and the Justice and Equality Movement (JEM) began fighting the government, which they felt oppressed the non-Arab population. Musaab talked to us about his story. He said:

“In 2015 I made the difficult decision to escape Darfur, on my own, and travel to the UK. It was a dangerous place to live and I felt I had no future. In Sudan if you’re a man aged 18-33 you have to take part in compulsory military service and fight for rebel tribal groups. I didn’t want to, I wasn’t even sure what most of those groups were fighting for. After I finished university in Darfur I knew I would be a target, like many other men my age. You’re suddenly not safe and you can be captured when you’re out shopping in the market or at home and forced to go to a training camp. I knew the only way I could escape this was by fleeing my country.

“There’s corruption everywhere in Sudan. Some families pay the government so their sons don’t have to take part in military service but my parents couldn’t afford it. I was living in fear of being targeted and knew I couldn’t live a free life. Teenagers, from rebel groups, who are armed, patrolled the streets shooting during the night and day. They were trying to force young men into joining them but they’re not aware of what they’re doing, they’re just being used. They’re part of a tribal war not a civil war and I had no interest in joining in.

The perilous journey to the UK

“When I decided to leave I left behind my wife and parents five years ago and haven’t seen them since. I didn’t know anyone in Europe, let alone Manchester, but risked my life to live in a country, which I knew would welcome me.

“I left my home in the thick of night and didn’t even get chance to say goodbye to my family. My dad had paid for a smuggler to take me on a boat from Egypt to Italy. From here I jumped on a train from Milan to Paris and hid in the toilet during the whole journey.

“When I arrived in Paris I had two options – the first was to sleep rough on the streets by the train station for months before being taken into a hostel or I could travel to a refugee camp in Calais.

“In order to claim refugee status I had to stay in Calais at the camp for 90 days and officially register myself by getting my fingerprints taken. The camp was a very dangerous place to live, it was lawless and other refugees were physically fighting.

“I had to leave and get to the UK. In order to so I had to risk my life and hid under a lorry for 40 minutes before we bordered the ferry to Dover. I remember how my muscles ached as I grabbed onto the machinery above the wheel on the lorry. I was so close to the road it was the most frightening experiences of my life.

“After arriving in Dover I was then taken in by the UK authorities and sent to Skelmersdale. I was then granted refugee status for five years. I could now breathe a sigh of relief and I managed to contact my family via Facebook and let them know I’d arrived safely.

“After 28 days as a refugee I needed to organise my own accommodation. I spoke to every local council in the area, from Manchester to Liverpool and was told because I didn’t have a local connection I couldn’t secure any accommodation. This was heart breaking as everywhere I went I was told ‘no’ and had to prepare to live on the streets.”

“By chance in July 2016, I found out about Cornerstone, a day centre and emergency accommodation provider in Moss Side, run by Caritas. This was when Caritas changed my life. I presented myself and said I was homeless and was taken into emergency accommodation for a month. From there the team at Caritas began supporting me in all aspects of my life and I was moved into a shared house in Fallowfield. Together with the help of a volunteer from Caritas I applied for social housing through Manchester Move and I was given one in March 2017.”

“I knew I needed to improve my English and began English classes in September 2016. I started volunteering at Cornerstone at the same time and began by serving teas and coffees. This proved to be a great way for me to improve my spoken English and make friends. Cornerstone fosters such a great community atmosphere. As a stranger it’s good for you mentally to be in an engaged community environment, where people are happy to chat to you. I met Andres, my English teacher, and enjoyed going to classes every day. Of the eight friends who were in lessons with me, we’ve all done so well, we’re all working and one is now a qualified architect.

“After being taught for two years I took functional skills English Level 2 and IELTS which I needed to get into university. It had always been my dream to study accountancy, as I love working with numbers and analysing them. Andres helped me apply for uni and I’m now heading into the third year of my Accountancy & Finance degree at MMU.”

“I wanted to give something back to Caritas after all the help I’d received from then and I now help run the English classes. I’m responsible for organising the lessons, finding volunteers and students, and providing internet access and funding information for students to join lessons online. I also help out with supporting students to apply to college, sign-up at the doctor’s and accessing finance.”

“I’m back at uni for the next year in September and after I graduate I want to work in an accountancy firm. I’m hoping, if my wife is able, she will join me and we can carry on our married life living in peace. I will of course continue to help at Cornerstone and support Caritas.”

I owe Caritas everything

“I’m not sure I’d be in uni or in any kind of safe accommodation if I hadn’t found out about Cornerstone. Looking for accommodation was so difficult. So many refugees end up on the streets, drinking to get through and that could have been me if the service at Cornerstone hadn’t existed.

“Through Caritas I’ve learnt English, to the extent I now teach it. That sense of community and the dedication of all the staff is brilliant. You get the opportunity to talk with teachers and volunteers while eating together after classes. Your teachers become your friends and you can practise your English. I’ve also met some of my best friends at Cornerstone, people who are also from Sudan and speak the same language, which helps me feel less homesick.

“I went from being destitute and living in emergency accommodation, to getting a qualification with Caritas and now succeeding on my university course.”