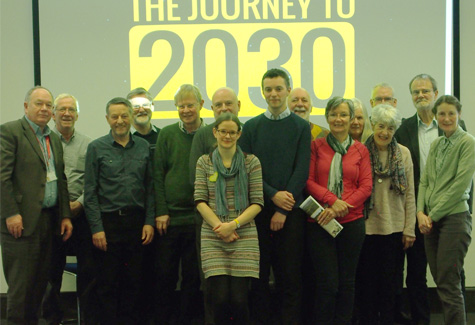 On Friday 30th January at the Cathedral Centre, Edward de Quay from the Environmental Advisory Group to the Catholic Bishops’ Conference of England &Wales, shared the work he is currently doing to engage dioceses and parishes in what Pope Francis, in his encyclical Laudato Si, has called ‘an ecological conversion’, which needs to happen now and certainly before the year 2030.

The Journey to 2030 Year of the Cockerel is a programme developed by Edward and his brother John for the Diocese of Arundel and Brighton. It is a lay-run campaign that aims to support the communities of the Catholic Church to progress along the long path to renewal. It is designed to help us to work together, create a sense of urgency and make sure that by 2030 we have curbed greenhouse gases sufficiently to prevent irreversible damage to the planet. “The Year of the Cockerel is not to be confused,” Edward says humorously, “with the Chinese zodiac but is symbolic of the need to hear nature’s alarm clock and wake up to what we are doing to our planet.” The cockerel also links us to the Gospel story of Peter’s denial of Jesus and reminds us that we cannot be people who deny the need for radical change.

In response to Laudato Si and the call to action of Pope Francis, The Northern Dioceses Environmental Group (NDEG) was formed in 2016. It is open to anyone who wishes to network and share good practice on environmental issues and learn about the role that individuals, parishes and dioceses can play. Hosted and convened by Caritas Diocese of Salford, the group consists of representatives from all the northern dioceses, which include Hexham & Newcastle, Lancaster, Leeds, Hallam, Nottingham, Shrewsbury, Liverpool and Salford. Amongst our regular attenders are coordinators from the Justice and Peace network, parish activists including Extinction Rebellion and CAFOD.

Individuals include the former environmental officer for St Lucia in the West Indies, the developer of the Laudato Si Centre at Wardley Hall and a nurse and mother concerned for the world her daughter will grow up in. In Salford Diocese we are blessed with two centres promoting this work: Wardley Hall, Worsley, and Lee House near Chipping in Lancashire.