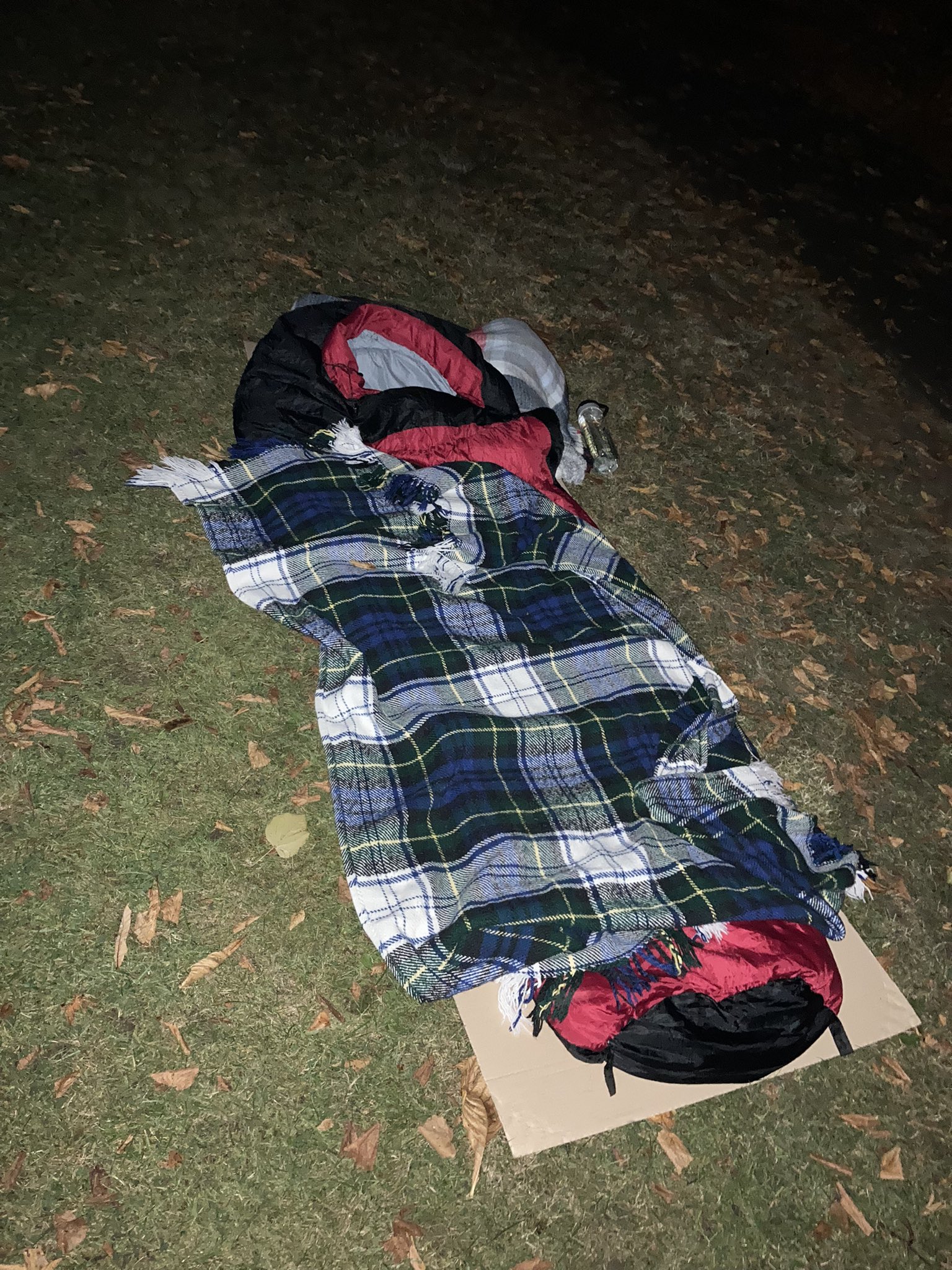 To develop and expand our response to those affected by homelessness across the diocese, we are presently restructuring our leadership team to include a focused post.  To support and sustain our work at the Caritas Cornerstone Day Centre in Manchester, we were pleased to be joined by Bishop John, members of the clergy and religious of the Diocese, and volunteers, at Xavarian College on Friday 17th September for the Big Sleep Out.  The outdoor event was cancelled last year, due to the pandemic, and has been our first public fundraising event since restrictions were relaxed.  We wish to thank every single participant, including the children and teachers in schools, and those who stayed home but gave up their bed for the night.  This event has so far raised £15,587 thanks to your efforts and the generosity of your sponsors and other supporters.  These vital funds will contribute to providing practical action and support for people in need.

We caught up with one fundraiser – Holly Jones – to find out more about what it was like.

When friends asked me how I would be spending my Friday night, sleeping outside in Manchester was definitely not the answer they were expecting.

As a person who is almost always cold and overly jumpy when it comes to creepy-crawlies, loud bangs, and even the dark, I admit the thought of sleeping outside all night did make me nervous. However, parked in a Moss Side car park about an hour before the event, my fears of being mildly cold and uncomfortable for the night were firmly put into perspective. Out of the corner of my eye, I spotted a lady laden down with bags, making her way from car to car asking if anyone would be kind enough to buy her something to eat. As people gestured their apologies, her face looked more and more desperate, but soon this was turned into the biggest smile of relief when a stranger offered to take her for food. Her genuine excitement – and difficulty in deciding between KFC and McDonalds – suddenly hit me and I thought: “This is exactly why I’m doing this”.

I then made my way to our home for the night: the Xaverian College in Manchester. Over the course of the evening, I met so many lovely and inspiring people; some were stalwarts of the Big Sleep Out, others were novices like me, but all were united in a common prayer for our brothers and sisters across the diocese who would also not be sleeping in their beds that night.

After Mass, celebrated by Bishop John in the college’s beautiful chapel, we heard from Caritas Diocese of Salford staff about the work they do and how our efforts would help those most in need across the diocese. After this, we all headed outside, set up our beds, and turned in for the night.

Straightaway, I was faced with a difficult decision: bench or floor? After a fair amount of weighing up my options, I opted for a grassy spot slightly under a tree. As I gazed through the branch up to the clear skies, I thought to myself: “this isn’t so bad”. Two minutes later, I was cold. Already I was wearing three layers and tucked into a sleeping bag and a blanket, but all too soon, time came for the emergency jumper. Again, I looked up to sky and thought about all sorts of things: what my family and friends might be doing, how I should take more opportunities to be outside and among nature, and how lucky I was that my being outside that night was a choice. I thought of the lady I’d met earlier and hoped she’d enjoyed the McDonalds she’d opted for in the end, and I thought of others I’d come to know of over the years who had never managed to break the cycle of street homelessness.

Time ticked on. The streets were noisy. Cars raced past pumping out loud dance music, and somewhere, a celebration must have been taking place as the sound of fireworks boomed across the sky. Suddenly, a patter of loud bangs ricocheted through the air. Half asleep, my first reaction was that it was the sound of gunshots – until common sense weighed in and suggested it was probably just a car backfiring. But that made me think of people right around the world who really do go to sleep to the sound of gunshots; people also sleeping out under the stars living in or fleeing from war zones, those whose home is in the heart of violent neighbourhoods.

A few shivers later and it was time for the final straw: the winter coat. Nestled tightly into a ball and covered in all the layers I had available, I eventually drifted off into some sort of sleep.

Morning arrived and I woke up, still folded up in my tight, cosy (of sorts) ball and I started to think about getting up and moving – but that would mean letting the cold in. Once again, my mind thought of those who weren’t choosing to spend the night outdoors. What did they do? What happens if they need a trip to the loo in the middle of the night? What would they do with all their belongings? I remembered speaking to a man from Caritas earlier who was telling me how scarce good, clean cardboard was, and how if you didn’t keep a close eye on it, someone else would be likely to take it. It seemed nothing was simple.

As dawn broke, our slightly bedraggled group of fundraisers gathered once more for morning prayers. As we were waiting to begin, I reflected on the whole experience, noting that it was just that – an experience. I was about to get back into my car, drive back home, have a cup of tea, a shower. But for so many people – more than 250,000 across England and one in every 154 people in Manchester – this isn’t just an experience: this is life.

But thanks to charities such as Caritas Diocese of Salford, that life can change. With funds generated from events like the Big Sleep Out and ongoing generosity throughout the year, Caritas is able to offer a helping hand to those most in need, delivering vital one-to-one support that can break the cycle of homelessness once and for all.