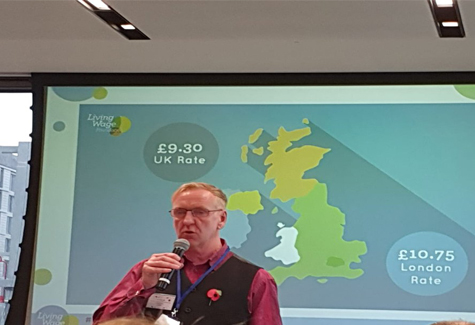 Caritas and the Diocese of Salford are proud to be members of the Living Wage Foundation, supporting the clarion call for more employers, especially within the Diocese borders, to join too and ensure they go beyond the government’s minimum wage and pay their staff enough to live on. In November the Living Wage here rose to £9.30 and employers in the scheme have six months to implement this pay rise with their employees.

Salford is currently on track to become the first city in England to be recognised for ‘Making a Living Wage City.’ The Diocese of Salford and Caritas are amongst a growing number of employers committing to the scheme, which is challenging the growing number of jobs (a worrying rate of 2,000 per year) in Salford that are offered below the real Living Wage.

Caritas has pledged to support the Living Wage movement by promoting the scheme on social media, sharing the advantages of the scheme with other employers and by making sure we do business with other Living Wage employers to break the cycle of the supply chains of providers that under-pay their employees.

At the event Caritas employee Sean Ryan spoke eloquently of his personal faith and commitment to the aims of the scheme.